Our Village, Our History


Sixty-seven years ago, Greenwood Village was a land strewn with farms, dairies, gravel roads, and a population of 500 residents. Today, those rural elements have been preserved with the addition of a developed, dynamic blend of urban and residential areas, and nationally recognized business parks that contribute to the well being of the village. As you read through our history, you will learn about many of the dedicated people and historic events that made Greenwood Village the Village it is today. From residents to elected officials to business leaders, these people were inspired to step forward to lead, plan, and protect the quality of life of Greenwood Village. 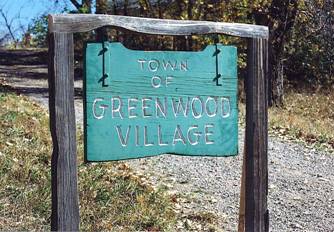 The land of the Village has a long and proud history beginning with pioneers and Native Americans who first settled this area. During the 1860s, settlers came from the east and mid-west to find gold.

By the early 1900s, the Village area thrived with orchards of cherry, apple, apricot, plum, and pear trees. Rufus Clark, a Colorado pioneer, bought 160 acres of land along the Platte River. Clark raised potatoes and eventually acquired 20,000 acres of land, including much of Greenwood Village east of Holly Street.

During the 1930s and ‘40s, the area contained a mixture of farmers, suburbanites, and people who lived in Denver, but would come south to “country homes” for the summer. The year 1950 brought many worries to residents that development creeping south from Denver would threaten their pastoral lifestyles. A group of residents took their concerns to their neighbor, Charles “Rollie” Enos, who agreed to chair a meeting at Curtis School. With a group of supporters, Enos proposed a new town and suggested it be called “Greenwood Village” after the historic Greenwood Ranch.

An election was held on September 8, 1950 to incorporate Greenwood Village as a town. Nearly the entire voting population, 138 people, turned out to vote. The incorporation passed by a close margin, 74-64. The small rural community became the Town of Greenwood Village and Charles Enos was elected its first mayor.

Check out some of our videos to learn more about the history of the Village.