The Curtis Center for the Arts is now re-open! Current COVID-19 guidelines will be required for all visitors which will include mask wearing, social distancing and there will only be a limit of 10 visitors in the Center at a time. If you are not feeling well please do not visit.

The current exhibit Old Myths New Stories has been extended through February 27! Exhibit is FREE and open to the public. No reservation is required.

All in-person classes for January have been cancelled. Classes are planned to begin in February at the Center. Please check website for more information and to register for a class go to www.greenwoodvillage.com/art.

For more information please call the Curtis Center for the Arts at 303-797-1779 or check the website for updates.

The Cultural Arts program creates an environment where artists and cultural organizations thrive by advancing and supporting the arts for the benefit of the citizens of Greenwood Village. Art and culture are integral to the livability of our community. Diverse cultural offerings play an essential part in the high quality of life in Greenwood Village and in maintaining a strong sense of civic pride. The Village’s contribution to the arts through its programs as well as ongoing collaborations with many local arts groups and individual artists makes Greenwood Village stand apart from other Colorado communities. In addition to initiating and supporting a variety of arts and culture programs, the Cultural Arts program manages the Curtis Center for the Arts bringing rotating exhibits and art classes for youth and adults, brings concerts and special events to the parks and other city venues and presents public art throughout the city.

Every year the Greenwood Village Arts and Humanities Council gives out two, $5,000 scholarships for graduating seniors who are pursuing a degree in the arts. The students’ schools also receive $500 to go to their art departments. Meet this year’s winners.

Willlem Luyten, 18, has studied violin since age three with Scott Esty and Emily Ondracek. Willem will attend Northwestern University next year where he intends to double major in violin performance and computer science . He has been a winner of numerous local competitions, including the Colorado MTNA, Stillman-Kelley Competition, the Loveland Symphony Orchestra Young Artists’ Competition, the Broomfield Symphony Orchestra Concerto Competition, and the Colorado Young Sinfonia Young Artists’ Competition. Willem was selected to attend the tuition-free Brian Lewis Young Artists’ Program, where he soloed with the Fairbanks Symphony Orchestra. In addition, Willem was invited to perform as soloist with the Pikes Peak Philharmonic. Over the summer, Willem has attended the Encore Chamber Music program at the Cleveland Institute of Music, Bowdoin International Music Festival at Bowdoin College, the Heartland Chamber Music Program, where he performed live on Kansas Public Radio, the Killington Chamber Music Festival, and the Lone Star Young Artists’ Program. Willem has been selected numerous times to perform in the Western States Honors Orchestra and the Colorado All-State Orchestra as first violin and concertmaster in their top orchestras. David Weinstein is a singer-songwriter from Greenwood Village. He writes mainly pop and alt-rock and is currently working on his debut EP.

David played in front of his first large audience with Inside the Orchestra when he was 6 years old. It was a Haydn's Concerto in front of a few hundred people and he immediately fell in love with the rush of adrenaline that came from being on stage. Classical music, however, did not hold his attention and after a few more years of playing Beethoven, Bach, and Chopin, he picked up the guitar and started learning covers of the contemporary artists he loved. Soon thereafter he began playing open mic nights around Denver eventually migrating to busking downtown as it gave him an audience whenever and wherever he wanted. David has played in various venues including Union Station, Herman's Hideaway, Brew Haus, Officer's Club, and the Museum of Contemporary Art, as well as a few local public concerts he's put together.

Last year, David played at the Boulder Creek Fest as the winner of their Teen Songwriting contest and showcased for Universal Records in LA as a finalist in the School of Rock national competition. The year before he received a full scholarship to Berklee’s 5-week summer camp as part of the Rock Workshop.

After attending the Durango Songwriting Expo, he connected with a few industry professionals who have since been helping him further his career. David has been working hard writing songs both for himself as well as other artists. Aron Forbes, Nick Pingree, Jason Mater are just a few of the big industry producers and songwriters with whom he has recently written.

While at Cherry Creek high school, in addition to pursuing a career as an independent musician, David started the songwriter club, was a varsity athlete, and honor student. He intends to continue studying music at NYU's Tisch school of music. He will be in the Clive Davis Recorded Music program.

At their January 6th meeting, the Greenwood Village City Council voted to purchase and install a piece of public art in the newly renovated Running Fox Park.The chosen work is “Within Reach” by Sedalia, Colorado artists Laurel Gregory. The process originated with a request from Park, Trails and Recreation Commission member, Ellie Moller, to the Greenwood Village Arts and Humanities Council. The Arts Council then opened a call for artists and received 29 submissions from 18 Colorado based artists. After forming a selection committee, the GVAHC presented the chosen piece to the PTR Commission and then to the City Council for final approval.

“Within Reach” is constructed of lost wax aluminum casting and depicts a playful fox sitting on a perch. The artists says of her work, "My art has always represented my vision and spirit. And if my current bronze sculpture series is any indication, that spirit is a tad whimsical." This whimsy can be seen in "Within Reach". The artwork was installed in May and is ready for you to view in person. The artwork was funded by the City of Greenwood Village’s Arts and Humanities Council. 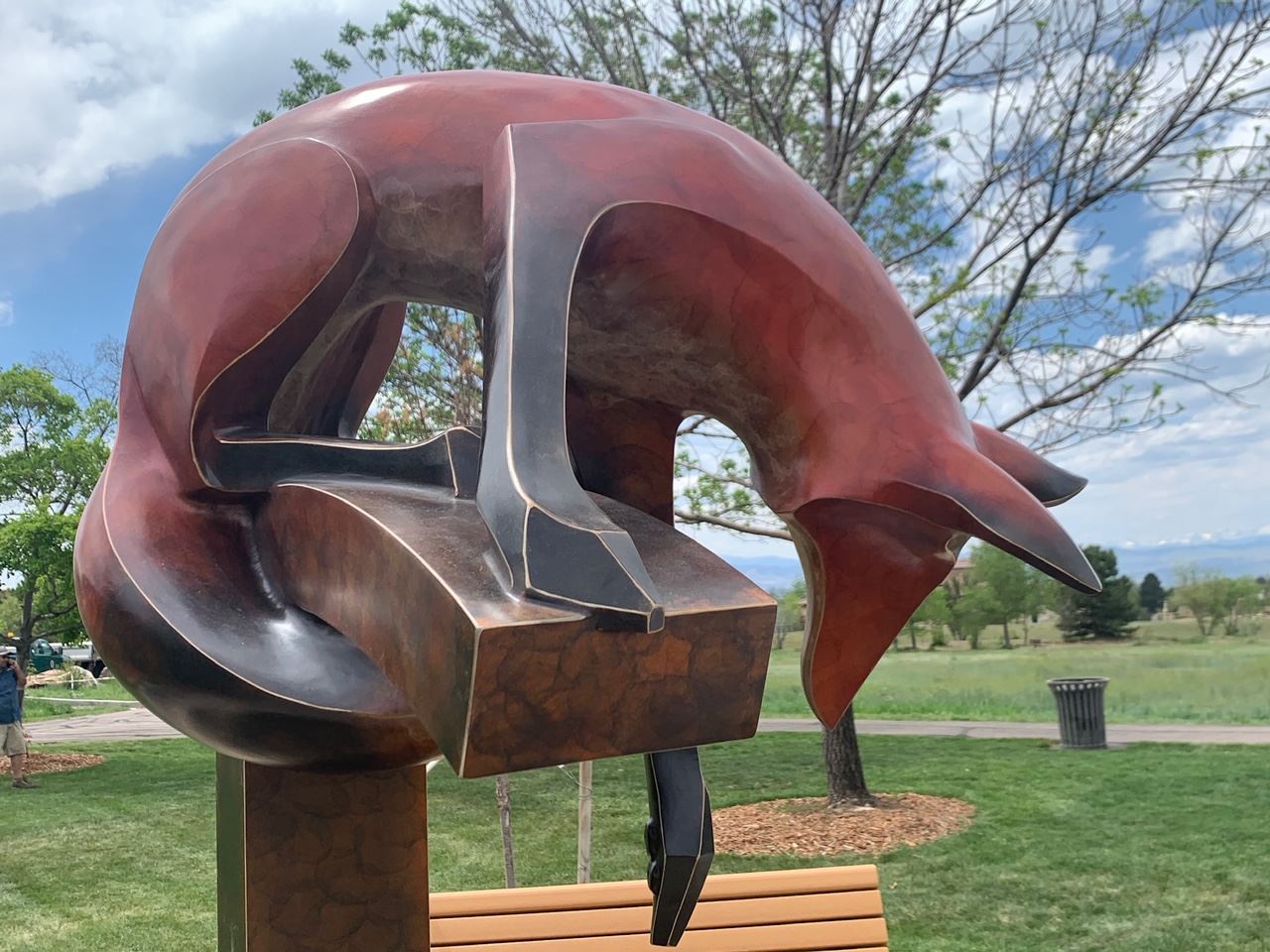 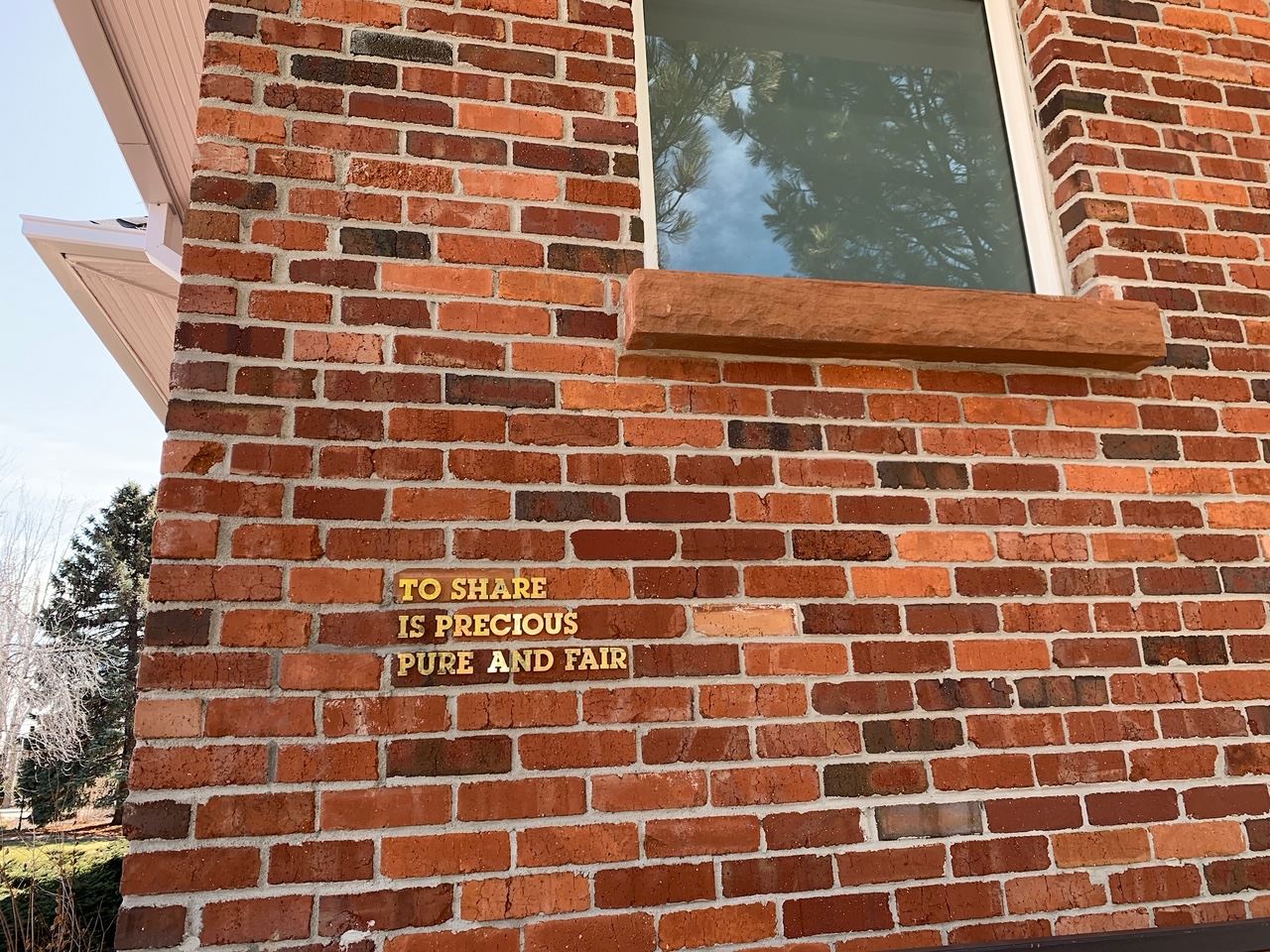 The Curtis Center for the Arts was selected by Black Cube, a gallery without walls, to participate in their latest project, SHARE. SHARE is a series of 100 small-scale, bronze, sculptural text installations by Mexico City-based artist and Black Cube Fellow, Anuar Maauad. The artworks are installed on building facades throughout the Denver area. Each sculptural phrase mimics the thick, geometric, slab serif font and gold coloring of the iconic Trump Tower sign. Maauad’s series of text installations are approachable in scale and relay an uplifting message: “To share is precious, pure, and fair.” The phrase is a lyric from “I Want You” by American singer and songwriter Marvin Gaye. In doing so, the artist subtly transforms an icon synonymous with power into an artwork that symbolizes kindness. By engaging numerous public sites throughout the community and encouraging members of the community to disseminate a positive anecdote, the artist is literally acting out the message of his work. The artwork at the Curtis Center for the Arts can be found on the north side of the building. More information can be found at www.blackcube.art.